New link between health and size of social group 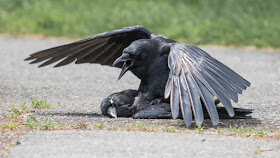 A new study has found that crows living in large social groups are healthier than crows that have fewer social interactions.

The research, led by Dr Claudia Wascher of Anglia Ruskin University (ARU), has been published this week in the journal Animal Behaviour. Dr Wascher and her colleagues studied a population of captive carrion crows over a six-year period. They monitored the behaviour of the crows in different sized groups and measured friendship by ranking the birds using a sociality index.

At the same time, they studied the crows' droppings to measure for the presence of coccidian oocyst, a gastrointestinal parasite that can represent an important health threat for birds.
Increased exposure to parasites and disease transmission is considered as one of the major disadvantages of group living. This new study, however, shows the opposite effect.

The researchers found that crows with strong social bonds, living with more relatives, and in larger groups, excreted a significantly smaller proportion of droppings containing parasites than less sociable crows.

The study did not find a connection between health and the crow's dominance within the group, but found that male crows (33%) were slightly more likely to carry the parasite than females (28%).

Dr Wascher, Senior Lecturer in Biology at Anglia Ruskin University (ARU), said: "Crows are a highly social bird and we found that crows with the strongest social bonds excreted fewer samples containing coccidian oocyst, which is a common parasite in birds.

"It is a commonly-held belief that animals in larger groups are less healthy, as illness spreads from individual to individual more easily. We also know from previous studies that aggressive social interactions can be stressful for birds and that over time chronic activation of the physiological stress response can dampen the immune system, which can make individuals more susceptible to parasites.

"Therefore the results from our six-year study, showing a correlation between sociability and health, are significant. It could be that having close social bonds reduces stress levels in crows, which in turn makes them less susceptible to parasites.

"It could also be that healthier crows are more sociable. However, as many of the birds we studied were socialising within captive family groups, dictated by the number of crows within that family, we believe that social bonds in general affect the health of crows, and not vice versa."