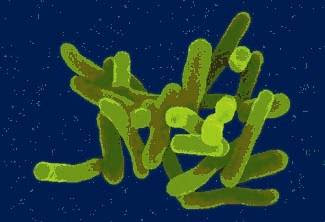 Using theoretical models of bacterial metabolism and reproduction, scientists can predict the type of resistance that bacteria will develop when they are exposed to antibiotics. This has now been shown by an Uppsala University research team, in collaboration with colleagues in Cologne, Germany. The study is published in the journal Nature Ecology and Evolution.

In medical and pharmaceutical research, there is keen interest in finding the answer to how fast, and through which mechanisms, bacteria develop antibiotic resistance. Another goal is to understand how this resistance, in turn, affects bacterial growth and pathogenicity.

"This kind of knowledge would enable better tracking and slowing of the emergence of resistance, and thereby lengthen the period for which antibiotics are viable as effective treatments of bacterial infections. It would also create potential for new types of antibiotics and therapeutic methods that entail a lower risk of resistance development," says Dan I. Andersson, Professor of Medical Bacteriology at Uppsala University.

When genetically adapting to a new environment, an organism undergoes mutations that modify its traits. Other recent studies have shown the difficulty of predicting which mutations will arise when bacteria adapt to new living conditions. For example, if a bacterium migrates to new surroundings with very low nutrient levels, its response will presumably be to evolve towards improved use of the limited resources. On the other hand, predicting the kinds of mutations that bring about this adaptation is much more difficult.

In the new study, the scientists generated a theoretical model that links both the degree and the type of resistance developed by the bacterium to its capacity to grow and divide. In their experiments, the researchers were then able to see that the more resistant the bacterium became, the more its ability of nutrient uptake deteriorated. This previously unobserved connection enabled them to predict which kinds of mutation would arise and how much resistance they would confer when the mutated bacteria were exposed to various levels of antibiotics. The results showed that a low antibiotic dose caused a particular sort of mutation to appear, while a high concentration resulted in changes of another kind.

"Our work is the first step towards developing models that connect bacterial metabolism and growth with mechanisms underlying resistance. That would pave the way for predicting ways in which bacteria change when they are exposed to antibiotics. The results also demonstrate the importance of combining theoretical models with experimental analyses to understand how bacterial metabolism is optimised under various growth conditions," Andersson says.